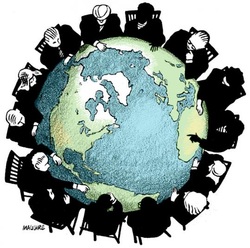 Our Trade Campaign continues to focus on the threat of the current government's hidden negotiations for a Comprehensive Economic Trade Agreement (CETA) with the European Union. This little known agreement threatens our communities and Toronto is one of the municipalities that has passed a resolution to opt out of CETA. We're also actively opposing the Canada-China Foreign Investment Promotion and Protection Agreement (FIPA). As the Harper government seeks to increase Chinese investment in Canadian resources (tar sands, natural gas, and mining) and related infrastructure projects, it’s important that we understand how China-based corporations will be able to use the generous investment protections in the FIPA to challenge environmental, public health and conservation measures in Canada.


Petition: NAFTA renegotiations cannot be another backroom deal (March 2017)
For years, we have seen the ravages of NAFTA – the Chapter 11 corporate lawsuits that have cost Canada billions of dollars and eroded our environmental and public policy, hollowed out manufacturing towns and put hundreds of thousands of people out of work, and created greater inequality in Canada, the U.S. and Mexico.
Now, U.S. President Donald Trump has issued an executive order to renegotiate NAFTA.
Canada's trade relationship with the United States has never been more uncertain.
There cannot be closed-door negotiations that put the interests of corporations ahead of the interests of people and the environment.
> Sign the petition: Council of Canadians

> What is the Trans-Pacific Partnership (TPP)?

> Chrystia Freeland's 'Public' TPP Consultations Are Anything But

> We made it happen: Your voices on a Jumbotron outside the TPP hearings

> The Trans-Pacific Partnership: Expanding the power of corporations

> How Will The TPP Affect You?

> Life under the TPP

WTO swats down India’s massive solar initiative (Feb 24 2016)
The World Trade Organization delivered a blow to India’s ambitious solar power program on Wednesday at the behest of the United States. So much for all that nice chatter about international climate cooperation back in December.
> Read more at Grist


Canada Sued For $568 Million Under NAFTA Over A Wind Farm That Ontario Cancelled (Feb 16 2016)
Ontario’s cancellation of a proposed wind farm in the St. Lawrence River could cost Canada $568 million, if a NAFTA tribunal rules in favour of a U.S.-based energy company.
Hearings began in Toronto this week into the case of U.S.-based Windstream Energy.The company launched a lawsuit against Ontario in 2012, after the province cancelled an offshore wind farm project the company wanted to build off Wolf Island, in the St. Lawrence River near Kingston.
> Read more at The Huffington Post

A New Infographic on TPP and Your Digital Rights (Feb 19 2016)
Anyone familiar with the Trans-Pacific Partnership (TPP) may find that it can be challenging to explain to others, in simple terms, how it threatens our rights online and over our digital devices. We often begin by describing the secretive, corporate-captured process of the negotiations that ultimately led to the final deal, then go into some of the specific policies - including its ban on circumventing digital locks (aka Digital Rights Management or DRM), its copyright term extensions that will lengthen restrictions on creative works by 20 years, and its inclusion of "investor-state" rules that could empower multinational corporations to undermine new user protections in the TPP countries.
But sometimes it's easier and more effective to spread the word about a complicated issue with imagery. That's why we created this new infographic that highlights just three of the most problematic aspects of TPP. We hope this will help users, advocates, and innovators from around the world spread the word about how this agreement will impact them and their societies.
> See the infographic & read more at eff.org