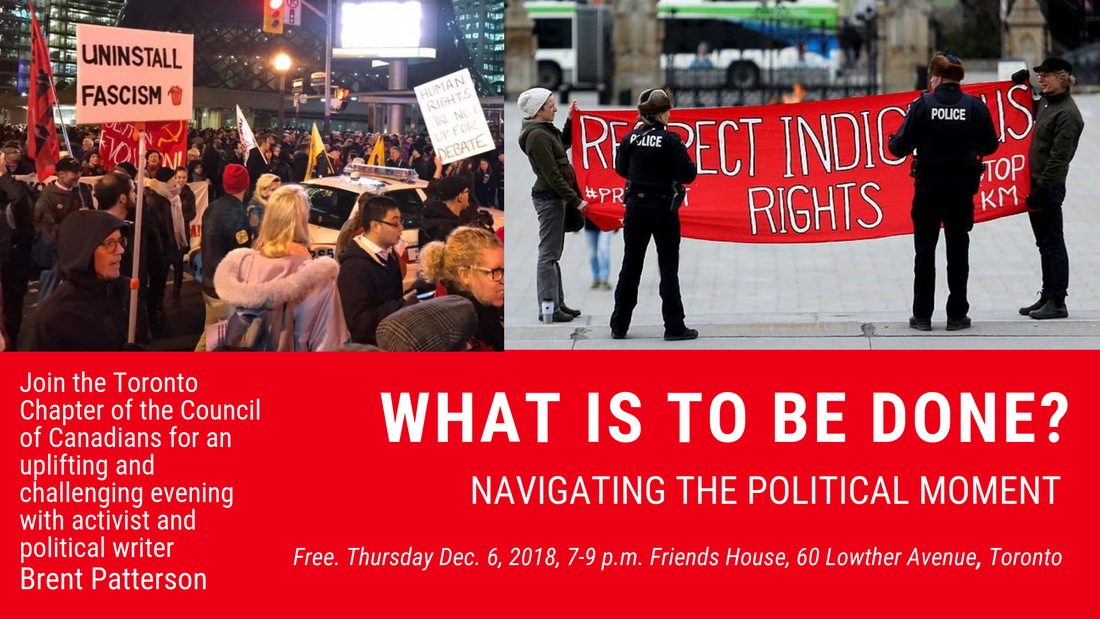 BRENT PATTERSON, well-known Canadian activist and writer for RABBLE will be speaking on
"WHAT IS TO BE DONE? THOUGHTS ON HOW ACTIVISTS CAN NAVIGATE THE CURRENT POLITICAL MOMENT"

Brent Patterson is a political activist and writer - you can read his excellent articles at - rabble.ca/category/bios/brent-patterson

Brent has worked in solidarity with revolutionary Nicaragua, advocated for the rights of prisoners in jails and federal prisons, taken part in civil disobedience actions in Toronto's financial district and at the Ontario Legislature, and participated in street protests at the Battle of Seattle and at UN climate summits. He supported cross-country activism at The Council of Canadians for almost 20 years. Brent has a BA in Political Science from the University of Saskatchewan and an MA in International Relations from York University. He lives in Ottawa on the traditional, unceded and unsurrendered territories of the Algonquin nation.

Brent's been travelling around Ontario for speaking events in Burlington (Nov. 20), London (Nov. 21), Hamilton (Nov. 27), Guelph (Nov. 28) and Peterborough (Dec. 5). And the Toronto chapter is so excited to be hosting him for the final stop of his tour!

Join us for an uplifting and challenging evening with a brilliant, passionate soul!


July 17
The $1.5 trillion dollar Canadian taxpayer rip-off!
… and what we can do about it


In 1974 the Liberal government of the day, without public discussion, or parliamentary vote, changed the way the country created its money supply.  Instead of continuing to use the publicly owned Bank of Canada to provide national financial needs, it allowed Canada’s private banks to create “new” money, out of thin air, which they then “loaned” to the Federal Government, at prevailing interest rates.  This interest is paid with real money collected from Canadian taxpayers.

Thus was started the accumulated national debt, which has seen a massive transfer of wealth to the financial institutions, and a cost now of more than $30 billion/year to taxpayers.  The overall cost to the Canadian public has been estimated to be ~ $1.5 trillion (and counting).


Electoral Reform and how to take Action!

​
Think it's time for Canada to finally have a voting system that's more fair and representative? One that doesn't allow a party to win 100% of the power with less than 40% of the vote?

Justin Trudeau wants to break his promise on Election Reform. But we still have a chance to make him do the right thing, and keep that promise.

On May 31st the report the Electoral Reform Committee created will be put to a vote. According to the rules of the house, if that vote passes, the report itself becomes an order which the government must carry out.

If enough MPs, especially Liberal ones, start signing on, Justin Trudeau will either have to put electoral reform back on the table or face a revolt within his own party.

We’re working on a tight timeline, from now until the end of May. Come learn how to get involved with the many actions taking place in Toronto!


Co-hosted by Reel Activism and the Council of Canadians (Toronto)

WaterDocs 2017
March 29 – April 2
An irresistible wave of water-themed documentaries is about to wash over Toronto with the sixth annual Water Docs Film Festival (waterdocs.ca/2017), turning the lens on issues facing local and global water systems, and celebrating water’s magical, mystical, life-giving properties. With a lineup of five feature film screenings and more than a dozen shorts over its five-day course.
We are officially invited to attend Water Docs, including the free first screening of RiverBlue on March 29 and the opening night gala, on March 30 (come say hi at our Council of Canadians info table on March 30).
As a special incentive, our members can receive 2-for-1 tickets, for all screenings, with this promo code: 241WD2017. Tickets can be purchased at http://waterdocs.bpt.me.
More info:
> waterdocs.ca/2017
> Facebook
> Video Trailer
> Twitter: @WaterDocs